This publication accompanies the counterpart exhibition, organized by the Fondazione Benetton Studi Ricerche and curated by Massimo Rossi at Ca’ Scarpa in Treviso from 5th February to 29th May 2022.

In the 6th century BC the Greek geographer and philosopher Anaximander of Miletus was ridiculed when he became the first man to depict the world as a circle – an astonishing geometrical and symbolic rendering of the inhabited world from an irreverent, almost sacrilegious point of view, looking down from the perspective of the divinity. Depicting the world means comprehending it, containing it, giving it shape, and at the same time giving proof of the conscious human desire to see it, interpret it, plan it, organize it in an attempt to understand the relationship between men and the places they inhabit – in short, the essence of the term geography.

It also means seeking to bring order to the world, proportionally and geometrically, to scale, and creating an artificial device so that it can be approached with less fear and its immanent disorder be absorbed and attenuated.

Divided into three sections (Non plus ultra, Plus ultra and Theatrum orbis terrarum), this richly illustrated volume examines world maps of all periods and provenances as expressions of social conventions that have imposed boundaries, decreed orientations to north, south or east, reified the abstract concepts of power and control, laid passionate claim to individuals’ place in the world and conveyed intense emotions of fragility and beauty.

From the mappae mundi in 13th century prayer books to the astonishing cartographic constructions that postulate and plan the world of oceanic trade in the centuries of the great geographic discoveries to the geographical carpets of our own day and to Google’s Mercatorian world map, these pages offer an opportunity to reflect on the dynamics of how our image of the world, something we live with every day, came to be constructed. They rediscover the successive archetypes that changed our place and introduced uncertain, unstable perspectives: from the centre to the margins, from the reassuring and conventional North to the edges of the circle that audacious and irreverent Anaximander of Miletus was the first to draw.

The collector of geographies

Massimo Rossi (1959), geographer and historian, graduated with honours from the University of Ferrara and went on to earn a PhD in historical geography at the University of Genoa. He won a Newberry Library of Chicago scholarship in 1989 and later worked at the Institute of Renaissance Studies in Ferrara as coordinator of the Historical Archive of Estense Cartography. He has taught geography at the Universities of Padua, Ferrara and Iuav, Venice. In the framework of the events to mark the Centenary of the Great War, he curated the exhibition organized by the Fondazione Benetton Studi Ricerche entitled La geografia serve a fare la guerra? (2016-2017), which received a special award for events of outstanding cultural and scientific interest from the President of Italy, Sergio Mattarella. He is a member of the Board of the Italian Centre for Studies in Historical Geography, of the Scientific Committee of the Bertoliana Civic Library in Vicenza and of the Deputazione di Storia Patria per le Venezie. He heads the map library and coordinates geographical research for the Fondazione Benetton Studi Ricerche. 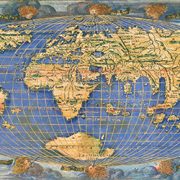 Drawing the world from the 11th to the 21st century