Fondazione Benetton Studi Ricerche presents Mind the Map! Drawing the world from the eleventh to the twenty-first century, an exhibition that revolves around the concept of the map and mankind’s attempt to draw the earth’s surface using every possible form of representation. The exhibition, curated by Massimo Rossi, will be hosted at Ca’ Scarpa, Treviso from 5 February to 29 May 2022.

The project forms part of “TREVISO CONTEMPORANEA”, an exhibition and cultural events platform that aims to bring an opportunity to the city to meet and learn more about the major themes of our time.

Mind the Map! is an invitation to pay attention to the map, to all maps, which are often wrongly used as substitutes for reality, carelessly and without much thought.

Paying attention to them means stepping into significantly complex and intricate worlds.

The exhibition, divided into three sections (Non plus ultra, Plus ultraand Theatrum Orbis Terrarum), is complemented by the book (in Italian and English), co-published by Fondazione Benetton Studi Ricerche and Antiga Edizioni, which contains a wealth of illustrations. The exhibition regards globes of all eras and origins as a way to express social conventions, which have set boundaries; defined directions such as south, north, or east; reified abstract concepts such as power and dominion; vehemently claimed one’s place in the world; or conveyed intense emotions such as fragility and beauty. From the mappae mundifound in 13th-century prayer books, to the extraordinary cartographic constructions depicting and shaping the world of trans-oceanic trade throughout centuries of geographical discoveries, as well as contemporary world map rugs and Google Web Mercator projection: the exhibition offers visitors the chance to reflect on the aspects involved in building the image of the world as we now know it. A way to rediscover the archetypes which, from time to time, have changed our place in the world to the point it has become uncertain and unstable: from the centre to the outskirts, from the reassuring and conventional North to the margins of the map.

The 40 pieces on display are high-definition reproductions from North American, European and Japanese libraries. The originals of the nine world map rugs of the 20th and 21st centuries, which are part of Luciano Benetton’s geographical collections, will also be on display.

Drawing the world from the eleventh to the twenty-first century

Opening times:
Fridays from 3 to 7 pm; Saturdays and Sundays from 10 am to 7 pm

Single ticket for the three venues:

Single ticket for the three venues, valid for the entire duration of the exhibitions. It may also be purchased online at www.liveticket.it
Visitors may take advantage of the culture bonus and 18App. 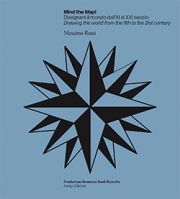 three exhibitions in three different locations in the heart of the city of Treviso, organized by Fondazione Benetton Studi Ricerche and Fondazione Imago Mundi.