Man Earth Contact by Stefano Taglietti features a dancer and three musicians performing onstage in a composition inspired by the man/land relationship in the Cappadocian landscape. Down the centuries this special, in some ways extreme, region has accompanied man to an almost symbiotic connection, at once necessary and life-sustaining, with the land and the plants and animals that live there. The place demands respect and at the same time gives life and ensures mutual survival despite the passage of time, which transforms every single thing and every living being. Respecting what they find there, the inhabitants past and present of the Red Valley and the Rose Valley have used inventive ingenuity to turn even the smallest resources to good advantage, transforming the environment yet remaining and feeling themselves to be part of it, hollowing out rock to make homes in the bowels of the earth and establish a powerful, intense relationship. The influence exerted upon man by the uniqueness of this land and the way man has responded down the centuries is there, in everything one sees: in its spiritual quality, in the civilization represented by the extraordinary rock-hewn structures and in their paintings, in the gardens and cultivated plots and in the plants that grow there. Cappadocia is one of those places where man is most explicitly part of the land and the land moulds man.
Starting from a poem by Pier Paolo Pasolini, The e mele (Tea and apples), which he wrote in Cappadocia in 1969, while he was working on his Medea, Laura Moro embarked on a kinetic research project with the aim of having the dancer’s body convey the essential features of this singular landscape. Inspired by the sensorial universe imparted by Pasolini, she created a gestural vocabulary rich in textures and resistance. Alternating with this the choreography fashions a transposition of the real and imaginary space generated by the words, like a handwritten line of joined actions, the tip of a paintbrush that follows the lines and planes of the images awakened and embeds them in the body. What transpires is a score in which Moro brings together gestural motifs and the sound universe of the composition, following its structure and allowing the sound to spark yet another creative level in which the dancer exploits the dialogue between the musicians to become like a “fourth voice” and an echo of the landscape.
The performance lasts approximately 25 minutes and falls into three parts:
1. Timeless land: the initial sound of long notes on the piano, played by the dancer, and of the kamale ngoni, a traditional African instrument; long notes as if interwoven with electronic sounds devoid of rhythm: the place observed in inner silence.
2. Contact with the earth: a crescendo evoking the sounds of nature and its rhythm.
3. Transformation and symbiosis: more rhythmical and animated, suggesting the physical union of man with the earth and the landscape.

Drama performance for dancer and three musicians
by and with

The work’s first performance took place on Friday 9th July 2021, during the public ceremony for the XXXI Carlo Scarpa Prizefor Gardens, awarded for 2020-2021 to Güllüdere and Kızılçukur: the Rose Valley and the Red Valley in Cappadocia. 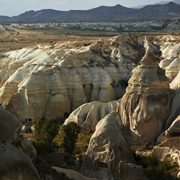