After five editions devoted to trying to understand the mechanisms and factors as to why the people and communities residing in these places assign significance to them, the sixth edition of the Outstanding Places project, subtitled “How we experience them, how we would like them” took one step forward in the direction often pointed out by the participants themselves, the “respondents”, and in keeping with what nevertheless also appears to be logical research developments.

The sixth call for proposals therefore explicitly asked respondents for a reasoned qualitative opinion on the reported sites in addition to a pro-active opinion on the current state, thereby elaborating, either individually or collectively within a group or committee, possible actions to be taken in the Outstanding Places.

The last submission date for nominations for the sixth edition of the initiative was Monday, 7 May 2012.

102 nominations were received from 87 “nominal” respondents, often joined by school groups or groups of citizens, demonstrating the commitment and continuous support of residents to this research project on the bond between people and communities and the places where they live.

Through the nominations of the respondents, who were always generous and engaged, it was possible to gather precious material, offering a wealth of interesting points, since — as expressly required by the 2012 call for proposals — many expounded at length on the reasons of their participation and, in many cases, were able to outline very tangible proposals for the future of the reported sites. One hopes all this might in some way, shape or form also be taken into account by those with more direct authority in those places.

Today the map of “Outstanding Places” of the Treviso region, put together year after year with more than six hundred respondents, includes 788 nominations and concerns 92 (out of 95) municipalities of the province.

An extensive analysis of the contents began with the now traditional meeting with respondents and administrators, also open to the public, which took place on Wednesday, 6 June 2012 at 3:30 pm in the auditorium of Palazzo Bomben in Treviso, and it was an opportunity to receive preliminary information and for a profitable exchange of ideas on the submitted nominations and on the initiative as a whole.

After the opening remarks by Marco Tamaro, Director of the Foundation, Simonetta Zanon, project coordinator, gave an overview of the work carried out over the last six years, reported the results of the sixth edition and briefly contextualised the project within the current cultural milieu while Massimo Rossi, head of the Foundation’s map library, illustrated the map of “Outstanding Places”. After that, ample room was left for discussion with the audience, guided and concluded by Domenico Luciani, creator and supervisor of the project.

November 2012, which was visited by almost 500 people. The total number of visitors of the six exhibitions on Outstanding Places, organised starting from 2007 for every edition of the project, has been over thirteen thousand people in almost 500 days open to the public. 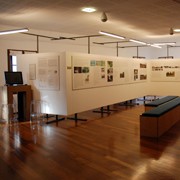 Outstanding places. How we experience them, how we would like them

The exhibition of all the materials received with the over one hundred reports of the sixth edition of the project,…