The exhibition of all the materials received with the over one hundred reports of the sixth edition of the project, subtitled ‘how we experience them, how we would like them’ and explicitly dedicated to responders proposals for the outstanding sites, has been conceived as an opportunity and place for discussion and exchange of ideas on the compiled materials and above all on the intentions of the responders’ projects, which all visitors are asked to express opinions on as well as build onto and integrate them.

As usual, at the exhibition, the Jury of the International Carlo Scarpa Garden Prize (an initiative which is ideally joined by Outstanding sites), which controls the scientific and cultural guidelines of the initiative, expressed its observations on the sixth edition and on the project’s future.

from Tuesday to Friday: 3-8 pm
Saturday and Sunday: 10 am-8 pm
free entrance 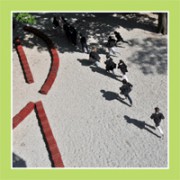 Outstanding places. How we experience them, how we would like them