Lino Bianchi Barriviera, painter and engraver, was born in Montebelluna on 3rd September 1906.

Based on his family’s decision he is enrolled in technical studies which he completes in Florence in 1927. At the same time he cultivates his artistic education and in 1925 he starts engraving, attending the studio of Raoul Dal Molin Ferenzona. Between 1927 and 1929 he lives in Treviso with his family, with two short breaks, in 1927 for to a trip to Libya and in 1929 for a stay in Verona. During those years he cooperates with “Illustrazione Trevigiana” and takes part in the annual exhibitions organised by the fascist committees in 1927 and 1929. In 1932 he moves to Venice, where, as a guest, he attends the engraving school of the Academy of Fine Arts and in 1934 he moves to Rome with his family. In 1937 he is offered the chair of engraving at the Fine Arts Academy of Naples and in the same year he makes a second trip to Libya, which results in a folder of thirteen engravings. Between 1938 and 1939 during a study mission in Ethiopia he is offered the opportunity to follow the archeologist Monti Della Corte on an expedition to the Lasta area, with the task of surveying the twelve monolith churches of Lalibelà. This experience will result in a cycle of etchings completed in 1957 with the comprehensive edition of plan views, sections, axonometric projections and details of the church decorations. Between 1940 and 1943 he takes part in the “War Painters” group following the invitation of the Navy Ministry. From 1950 to 1954 he takes on the post of director of the Fine Arts Academy of Naples and in 1956 he holds the engraving chair at the Fine Arts Academy of Rome, where he teaches until 1976. After that he directs a training course for burin engravers at the State’s Printing Works and Mint.

In his last years, as his artistic production slows down, he devotes himself to writing a handbook of engraving techniques, Engraving and original printing, published in 1984 by Neri Pozza.

Bianchi Barriviera mainly worked with etching, but also devoted himself to the applied arts, wall decorations, drawing and painting. His life was distinguished by an intense exhibition activity, both personal and collective. He won a number of awards and accolades.

Contents of the collection

Electronic inventory available in the Foundation archives and updated to 2010, available in printable version.

Monographs and periodicals are also accessible from the library’s catalogue.

The Barriviera collection is accessible according to the archive’s regulations.

The collection was gathered and partially increased by his sisters, in particular by Delia Bianchi, and gifted by her to the Foundation in November 1999. 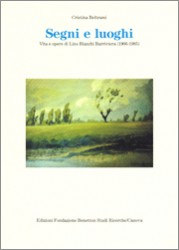