Historical gardens, truth and fiction casts an apparently ironic, almost irreverent eye on those occasions in the last century when history was exploited to replicate garden forms and designs, sometimes overt copies. In many cases these were ‘genuine fakes’ that expressed and attitude to the past that we are now in a position to appraise with sharper insight.

The same period, however, also produced many more convincing examples that reveal sensibilities of a different kind, thanks to which work in the field of historical gardens has fostered continuity and developed a passion both for understanding and for the creative exercise of a critical interpretation of history.

Starting with the themes tackled by the 2019 International Landscape Study Days and other research and experimentation workshops organized recently by the Foundation, eighteen authors explore various lines of enquiry in sixteen contributions. Together these chapters reconstruct a complex geography of relationships, exchanges and richly fertile reciprocal influences on which contemporary garden and landscape culture continues to draw, inspiring projects that don’t simply freeze-frame the forms of the past but which rather raise questions about the continuity of places and the contexts to which they belong and on the presence of those who inhabit them and take responsibility for their future.

Readings and interpretations of historical models

Luigi Gallo and Chiara Comegna, The gardens of Pompeii: evocations of antiquity and scientific understanding

José Tito Rojo, The untroubled imagination. Fantasies in the gardens of the Alhambra

The fortunes of the Italian garden: inventions, copies, influences

Evolution and invention in the landscape of north-eastern Italy

Giuseppe Rallo and Simonetta Zanon, The Farsetti garden in Santa Maria di Sala. A villa veneta landscape and its future

Annachiara Vendramin, The park at Miramare, Trieste: between reality and illusion

European landscape architects and the reinterpretation of the historical garden: some examples

Monique Mosser, Reaction and progress. Return to history and modernity in gardens in France, 1867-1937

Luigi Latini, The short life of a modern garden. Pietro Porcinai and the Villa Theobald in Cologne, 1961-1964

Dieter Kienast and the sense of history in contemporary Swiss gardens, edited by Simonetta Zanon

Index of names and places

Monique Mosser, historian of art, architecture, and gardens, is a researcher at the CNRS (Centre André Chastel, Paris), and honorary member since September 2012.

José Tito Rojo, botanist, since the outset of his professional activity, has devoted himself to the subject of gardens, both from a theoretical, primarily historical, point of view and in practical terms, as a garden designer. 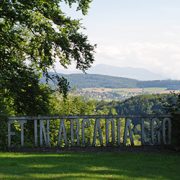