Looking at the intellectual dimension of the landscape designer engaged in the ‘sensitive’ areas of historical contexts, the study intends to examine the operational and theoretical approaches of two figures who work with an artistic approach and sensitivity: Pascal Cribier, French (1953-2015) and Michael Van Gessel, Dutch (1948). Following the logical thread of the contemporary intervention in the historical garden, the research identifies a few examples among their works carried out, which add an evocative force to historical places, where the contemporary intervention blends between plant patterns, revealing hidden heterochronics, while accepting public social sharing practices. The analysed projects interpret the garden as a concentration of temporal overlaps, finding the extent of change by reading and translating historical memories via poetic transcriptions, to define the rules of the project according to an inventive interpretation. Authors of “practical wisdom” rooted in the palpable immersion of places, with a profound artistic bent and botanical expertise, Cribier and Van Gessel articulate the design process in a continuous interaction between analysis and sentiment, between inert and living, in the attempt to exalt the genius loci and making it evident, in a weighted balance between knowledge of historical complexity and intuition of the transformative potential, through a project intended as an incremental schedule. In a relationship of familiarity with the place between the specificity of the context and the autonomy of the new intervention, the two designers work in cultural landscapes between conservation and innovation, with the aim of triggering consistent relationships within the historical space, adding, removing and modifying, with the awareness that their intervention is an episode of a constantly evolving story. (E.A.)

Elena Antoniolli. An architect specialising in Landscape Architecture and who combines her business as a selfemployed professional, which includes winning several competitions on designing open spaces and the regeneration of abandoned urban areas, with her teaching activities at Iuav University regarding the representation and composition of the landscape project. Following the Master’s Degree at Iuav in Landscape and Garden Architecture, Elena collaborated with CZstudio Associati, providing support to design squares, parks and historic gardens, taking care of the firm’s PR activities and participating in international competitions related to urban transformation, soil permeability and environmental sustainability, with a special focus on the administrative and coordination process of the work team. 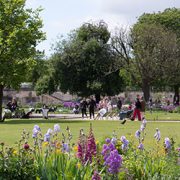