Friday 17th November at 6 pm will see the opening of the exhibition Lotteries, lotto, slot machines. The luck of the draw: the history of games of chance. It will remain open to the public until Saturday 14th January 2018. Organized by the Fondazione Benetton and curated by Gherardo Ortalli – historian and professor emeritus of the University of Ca’ Foscari, Venice – in collaboration with other international scholars, the exhibition sets out to conduct a historical analysis of a phenomenon that has a considerable impact on the lives of people and on society at many different levels. «Game-playing is an innate and fundamental need in people’s lives, as is evident from the spontaneous way children engage in playing games and their educational role from babyhood onwards», explains Ortalli.

«Ingenuity and complexity are elements that mingle in many ways in game-playing, and one of these, whose social repercussions need to be monitored carefully, is the combination of games and money, betting, luck, gambling. In short, games of chance constitute a phenomenon that has always been a feature of societal life, in various more or less regulated forms. There is no doubt about the serious consequences games of chance may have in personal and societal terms when they are not properly controlled. But one must not conclude that the dangers are confined to our present day. The invention of dice-throwing as a game of chance was a product of classical culture at the time of the Trojan War. And it has always been a matter of concern to keep gaming practices under control. States have intervened in a wide variety of ways and the current methods whereby public authorities themselves seek to administer and regulate the gambling of money started in Europe in the Middle Ages and have in principle been exercised ever since».

This aspect of social history underpins an exhibition that aims to offer an accessible presentation of a complex phenomenon which holds extraordinary importance for our society, a phenomenon which is now so infinitely more sophisticated than the placing of bets on the outcome of mayoral or papal elections from which it is descended.

The Civic Museum of Treviso has loaned its magnificent Lotto draw in Saint Mark’s Square, by Eugenio Bosa; and from the Salce Collection National Museum come a number of early 20th century lottery posters. Documents and ancient games have been lent by the archives of the Belgian National Lottery in Brussels and by the Classense Library of Ravenna, and there are loans from the private collections of Alberto Milano, Silvio Berardi and other scholars and enthusiasts, as well as items from the Dal Negro playing card manufacturers.

Saturday and Sunday 10 am–8 pm

Gambling in the Middle and Modern Ages

Ethical and aesthetic models for Europe 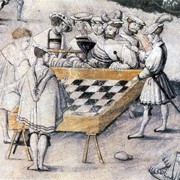 Gambling and everyday life today, from games to ludopathy

Two Thousand and Seventeen: a year that is worth thirty

The foundation is thirty years old