The Jury of the International Carlo Scarpa Prize for Gardens has decided unanimously to dedicate the twenty-fifth annual award to Osmače and Brežani, two villages in Podrinje, a region of eastern Bosnia, near the border with Serbia. We are on the plateau above Srebrenica, a place where the landscape is furrowed by watercourses and wrinkled like a walnut, enclosed by the deep-cut gullies of a big loop of the Drina, a river which has played a crucial role in European history and culture, at once separating and connecting major civilizations in the Balkans; an area that inevitably prompts one to reflect on the contradiction between the beauty of nature and the still omnipresent signs of war. Osmače and Brežani together comprise one of the many places in Bosnia and Herzegovina where, two decades ago, the life was torn from a community, its long-established tradition of living together in a multi-cultural environment was destroyed and those who survived were dispersed. What makes these villages a witness to a supremely significant experience is the presence of a small group of families, farmers and stockbreeders, who for some years have been trying to find the road back to the texture of the life they remember, to construct new relationships between people, to renew the necessary ties binding space to be occupied, land to be tended, houses to be rebuilt, human dignity to be recovered.

So the place is now a sort of archipelago of hamlets, settlement cells a few hundred metres from each other scattered over an area of around 20 square kilometres at an altitude of between 900 and 1,000 metres, a patchwork of meadows and woods scored by streams and rivers. Every hamlet in turn is made up of a varying number of houses far enough from each other to be called detached, but close enough to connote a settlement with a name.

The houses, buildings whose constructional simplicity is visibly derived from the basic nature of the means and materials available, are each surrounded by an open space allotted to a courtyard for domestic animals, a kitchen garden and an orchard; each property shares common boundaries with those of other houses on several sides and on one side gives onto the road, a layout that lends itself to interrelations, to neighbourliness, to the exchange of the fruits of the land and of the kitchen. The personal and family relationships that are developing from such beginnings, expressions of a common material culture and a collective care for the physical environment, seem capable, in time, of constructing a new integrated anthropological texture based on full respect for differences of culture, taste and devotional practice. The houses and their immediate environs are the intersections in a network which constitutes, at hamlet level, the foundation of community space and time.

The way these hamlets relate to each other without hierarchy, without a centre, surprises us. But in fact, the archipelago of settlements that gives shape to a multicultural microcosm is developing within spaces that bear the marks of different memories, different hierophanies, the different religious buildings, the little cemetery, the little shrine with its list of the fallen, the crossroads with the fountain, a meeting-place for passers-by and grazing animals.

Of striking symbolic importance is the school, which “before” had brought together over 500 children from various surrounding villages in a fine “modern” school building constructed in the 1970s and which now lies in ruins in the centre of a huge clearing in the woods between the hamlets making up Brežani and Osmače.

Text taken from the 2014 Carlo Scarpa Prize Statement, edited by the Jury. 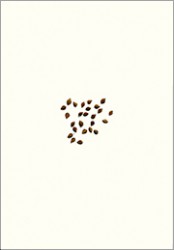 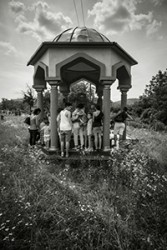 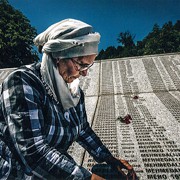 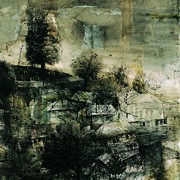