produced by the Fondazione Benetton dedicated to the study trip on the occasion of the International Carlo Scarpa Prize for Gardens 2016.

A journey through the geographical, historical and cultural area of the Silk Road running through the heart of Central Asia, among the forests of wild apple trees that populate the ridges of the Tien Shan mountain range on the border between Kazakhstan, China and Kyrgyzstan and the Uzbek valleys leading to Samarkand.

Filmed in the regions of Almaty, Tashkent and Samarkand, in Kazakhstan and Uzbekistan, in the midst of apples, animals and remote places, this video-diary is divided into six chapters corresponding to the main stages of the study trip taken by the Foundation’s Scientific Committee through “Places and landscapes in the regions of Almaty and Tashkent”, between 30th August and 7th September 2015.

In addition to these places, the story features members of the scientific committee of the Fondazione Benetton Studi Ricerche who, coordinated by Patrizia Boschiero and Luigi Latini, are engaged in observing and analysing of the various contexts visited to identify the place to be designated for the study campaign of the International Carlo Scarpa Prize for Gardens 2016.

The study trip offered the opportunity to carry out scientific research in the field and participate in meetings and discoveries that may provide further occasions for new research and unpublished in-depth studies, contained in the monographic volume dedicated to the prize-winning place, The wild apple forests of the Tien Shan. The International Carlo Scarpa Prize for Gardens 2016, XXVII edition, edited by Giuseppe Barbera, Patrizia Boschiero, Luigi Latini, with Catherine Peix, Fondazione Benetton Studi Ricerche-Antiga, Treviso 2016 (172 pages, 185 illustrations in colour and 79 black and white, ISBN 978-88-97784-95-1, English edition ISBN 978-88-99657-06-2).

For public screenings or other information about the film: pubblicazioni@fbsr.it. 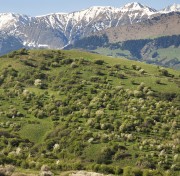