Documentary film produced by the Fondazione Benetton dedicated to the place designated by the International Carlo Scarpa Prize for Gardens 2019.

The story of a site in the heart of the Brancaccio district of Palermo that, despite the many transformations taking place in the city suburbs in recent decades, still conserves the memory and tangible evidence of what this landscape represented to the Arab and Norman civilization in the wider context of the area later known as the “Conca d’Oro”, on this island in the heart of the Mediterranean.

Today Maredolce-La Favara is a vast depression in the ground, once occupied by a large lake, with a still recognizable, irregularly shaped island at its centre and a magnificent palace standing between the edge and the houses built in the city outskirts over the years. The island, which covers about twenty-five hectares, contains a complex system of structures, hydraulic devices and a vast citrus grove, revealing its past as a country retreat with extensive cultivations that reached its heyday in the 11th-12th centuries, particularly during the reign of Roger II.

Standing on the outskirts of a city whose sprawl is disfiguring its perimeter, this place is an outpost of the system of surviving citrus groves extending south beyond the Oreto river, between the slopes of Mount Grifone, the streets of Ciaculli and the coast, a marvellous patchwork of agricultural landscapes, a concatenation of lands transformed by human actions that are known as “gardens” here at the centre of Mediterranean civilization.

Maredolce-La Favara has withstood the many attempts to interfere with the Palermo landscape and the various social pressures, projecting into our world the value of the encounter between the different cultures that engendered it, an emblem of the rebirth and hope of the Brancaccio neighborhood surrounding it.

For public screenings or other information about the film: pubblicazioni@fbsr.it. 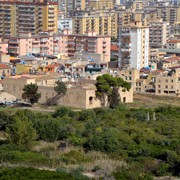