The analysis presented in the paper «Quod agendum? Rosario Assunto, between report and design» concerns a reflection on landscape carried out by philosopher Rosario Assunto (1915-1994) and more specifically the design aspects of his system. In order to identify Assunto’s directions on how to steer present and future activity, the research work analysed an extensive part of Assunto’s philosophical production (works, magazines, essays, prefaces, letters to colleagues and newspaper articles), first and foremost with the aim of seeking to define the general features of the philosopher’s ideas, the era in which they were developed and their distinguishing peculiarities. After this initial survey of Assuntian ideas, the study then delves into the elements conducive to interpreting Assunto’s philosophy as a design philosophy open to evolution, identifying them in the multi-shaped character of beauty and man’s ability for critical thinking and discovery. Lastly, the final part of the paper collects the main cues provided by Assunto on how the territory should be managed so that space turns into landscape again, highlighting the importance that a shared, responsible approach to landscape issues – aware of the history and unique qualities of the sites – would have in this respect.

Author of «impure thought», Rosario Assunto was a multifaceted and passionate scholar, able to investigate with an original approach a wide variety of topics, such as the artistic forms of the Middle Ages, German philosophy of the early nineteenth century, the 19th century poetics of Rilke and Valéry and the disappearance of landscape beauty in Europe after WWII.

Photograph: Stones and water, images of time like «restless presence of an ever-repeating future, always anticipating its being the past». Tivoli, the waterfalls. (The picture and caption reproduce one of the plates included in the first edition of Il paesaggio e l’estetica (Landscape and Aesthetics), Giannini, Napoli 1973). Excerpt from Luoghi. Forma e vita di giardini e di paesaggi (Form and life of gardens and landscapes) (International Carlo Scarpa Prize for Gardens, 1990-1999), by Domenico Luciani, Treviso 2001, Rosario Assunto, pp. 53 and 54. 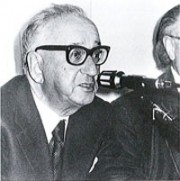