The public lecture looked at a crucial phase of change in taste and quality of life, by focusing on the personality of Graziano Appiani (Milan 1850-Treviso 1920), a ‘political entrepreneur’ who played a pivotal role in the cultural and social transformation of Treviso between the 19th and 20th centuries.

The study day, opened and chaired by Domenico Luciani, featured the participation of Antonio Basso (The image of the city during the transformation between the 19th and 20th century), Andrea Bellieni (The shape of the city between the 19th and 20th century), Livio Fantina (Continuity and rifts in the cultural and social models of Graziano Appiani), Gianfranco Pintacuda (A study of Appiani houses conducted at the school), Livio Vanzetto (The personality of Graziano Appiani in Treviso in the early 20th century) and Roberto Zilio (The Eden theatre: “magnificent and artistic new construction”).

The programme also included a guided tour of the “Appiani, vita di un’azienda, 1860-1995/Appiani, the life of a business, 1860-1995” exhibit, curated by Pompeo Pianezzola and Vittorio Rossi and organised by the Unione degli industriali della provincia di Treviso (the Union of Industrialists of the province of Treviso) with the cooperation of ICR Appiani of Oderzo.

A notebook developed from the materials of the seminar and from other studies conducted in the meantime (Appiani e Treviso, Idee, opere, protagonisti della tensione modernista nella città tra Otto e Novecento / Appiani and Treviso, ideas, works, protagonists of the modernist tension in the city between the 19th and 20th century), edited by GIANLUCA MARINO, Treviso 2003), published in the “Memorie” series, confirming the Foundation’s focus on the history of Treviso, the personalities and events that influenced it in various ways.

This is a collection of documents from various sources, pertaining to both the facility and family of Graziano Appiani (Milan 1850-Treviso 1920). It is interesting for the light it sheds… 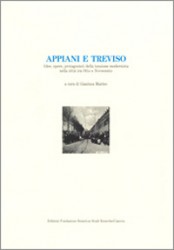