The Atlante Veneto project was launched in 2012 following an Agreement between the Veneto Region and the Fondazione Benetton and has multiple purposes: a survey of printed and manuscript cartographic materials stored in the libraries and archives of the region; the promotion of training courses for librarians in the cataloguing of cartographic materials; making a contribution to the drawing up of national cataloguing guidelines by agreement with the Central Institute for a Comprehensive National Catalogue. Implementation of the Atlante Veneto project represents an essential step towards the appreciation of materials that are still little known and often uncatalogued, and at the same time promotes the attainment of the objectives set forth in the European Landscape Convention.

The Atlante Veneto project was divided into survey campaigns pertaining to the seven provinces of the Region. A methodology devised in 2012 enabled work to begin in the province of Treviso. In 2013, the survey was extended to the province of Padua and in the following year to the province of Vicenza. Belluno and Rovigo became involved in 2015 and the remaining two provinces of Verona and Venice in 2016. Altogether, the survey recorded 64,000 volumes of atlases and books containing maps, and around 165,000 printed maps of various periods, most of them not previously inventoried, in 150 of the 916 libraries contacted.

The surveys so far carried out have revealed one significant overall feature: only a very small number of the documents concerned have been catalogued, mostly on record cards. Of the remainder, most did not even appear in inventories. In view of this situation, it was decided that the Atlante Veneto project should prioritize the organization of training courses for librarians and in May 2013 the Veneto Region financed a first course focusing on the cataloguing of cartographic materials of the Great War, coinciding with commemorations of Italy’s entry into the conflict. Further courses, organized in subsequent years together with the Veneto branch of the Italian Association of Libraries, were followed with increasing interest by the librarian community. In 2018 the National Association of Italian Archivists asked for the Atlante Veneto protocol to be applied to its own training courses for cataloguers.

The second stage of the Atlante Veneto project got underway in December 2018 with a memorandum of understanding between the Veneto Regional administration and the Regional Secretariat of the Ministry of Culture and Tourism. This provided for the project to be extended to cover manuscript cartography. The importance of continuing the project was fully appreciated by the Secretariat, which enabled the survey to be expanded to include the archives and libraries that had not been covered in the first phase. February 2019 saw the setting up of a Regional Coordination Unit for Historical Cartography with representatives from the Regional Secretariat of the Ministry, the Veneto Regional administration and the Superintendency for Archives and Bibliography of the Veneto and Trentino-AltoAdige. This led to the creation of a Working Group for the support of the project, comprising the above institutions plus the Fondazione

Benetton and the Veneto branches of the AIB and the ANAI. This second stage survey has been underway since early 2019.

The aims of Atlante Veneto

As well as seeking to ensure the conservation of current and historical cartographic material and to raise awareness of its importance in terms of cultural heritage, the project also stresses its importance as a source of the history of places, a collective memory of society’s intentions and perceptions of its territorial setting and therefore as an indispensable tool in any reflection on it or planning for its future. Above all, Atlante Veneto sees itself as an aid in territorial planning, in drafting the Regional Territorial Coordination Plan and in enhancing knowledge of the area and its significant landscapes in preparation for the Regional Landscape Plan. In short, printed and manuscript cartography constitutes a primary source not only for an understanding of the historical and geographical identity of places, especially those in the Veneto, but first and foremost to contextualize and orientate the future management of our contemporary landscape in the light of previous projects and of graphic records created by like-minded public and private stakeholders. 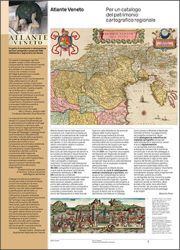