In Central Asia, on the northern slopes of the Tien Shan mountain range, lie the scattered remnants of a vast ancient forest that was home, millions of years ago, in the Tertiary, to dozens of the species that would give rise to the fruits accompanying humans throughout their history. The woodlands stretching from western China across northern Kyrgyzstan and Uzbekistan, and right down to south Kazakhstan are dominated by the wild apples that gave the former capital of Kazakhstan its name: Almaty, or “Fatherland of Apples”.

It is to this system of forests and to the many questions raised by these places and by the fragile condition that they share with human activities and culture, a precious testimony of cultural biodiversity, that the Scientific Committee of the Fondazione Benetton Studi Ricer­che has chosen to dedicate the campaign of study and care of the twenty-seventh Interna­tional Carlo Scarpa Prize for Gardens.

The earliest precursors of the apple tree probably reached the area via seeds carried there by birds from China, resulting in a huge variability that was further enhanced by the envi­ronmental diversity of the Tien Shan mountain range and in an extraordinary biodiversity that persists today despite thousands of years of deforestation and fires mainly intended to clear land for farming. This biodiversity expresses itself in fruits of many different shapes, sizes, flavours, and colours, and in trees with differing heights and habits: a genetic pool of immeasurable interest that no form of biotechnology can even begin to approach.

The wild apple of Kazakhstan is named Malus sieversii after the botanist Johann Sievers who was the first to describe the species in the late 18th century.

Mountains up to 7,000 metres, deep valleys, plateaus and slopes with different orientations leading to vast differences in temperature and humidity cause this diversity to assume dif­ferent forms in response to the different growing conditions. In the northernmost region, in the Tarbatagai mountains, you can find stands ranging from ten to two hundred trees, some growing on steep slopes and reaching as far as the snow line. In the Djungarsky area, wild apple trees dominate huge forests, reaching incredible ages and heights – some are as old as three hundred and fifty years, while the tallest can reach 30 metres in height. In the Aksu Zhabagly area, on the border with Kyrgyzstan, there are isolated apple trees and small groves that are highly resistant to disease and drought, even extreme drought conditions. All three forests have suffered huge losses but none so more than the forests on the Zailiysky area, the part of the Celestial Mountain range closest to Almaty, where eighty per cent of cover was lost in the Soviet period.

These are the forests that attracted the attention of Aimak Dzangaliev (1913-2009), who studied the Kazakh population of Malus sieversii from 1930 to 1990, and who was also dedicated to safeguarding this fruit. Since 2010, Alma, the association promoted by Cathe­rine Peix and Tatiana Salova – Aimak’s widow – has been committed to raising the aware­ness of the local government and of the international community in order to diffuse knowl­edge and conserve both the wild apple forests and the memory of Aimak Dzangaliev.

Text taken from the 2016 Carlo Scarpa Prize Statement, edited by the Scientific Committee of the Foundation. 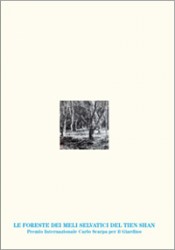 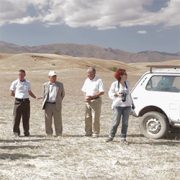