The exhibition devoted to the 21st edition of the International Carlo Scarpa Garden Prize presents a selection of photographic and documentary materials illustrating the useful historical-geographic background, the archaeological events, the landscape and cultural aspects to understand the importance of the Dura Europos site in Syria.

The set-up of the exhibition begins with the first section recounting the site’s archaeological discovery and the intense excavation and research activity through much of the 20th century. The second section focuses on the forma urbis of Dura Europos, its urban evolution, its position on the bank of the Euphrates. The last section highlights the amazing character of the large dispersal of findings and material testimonies which, following the various excavation seasons, have been housed in museums and collections in different parts of the world.

The illustrative panels that characterise the three exhibition sections are integrated with multimedia systems. 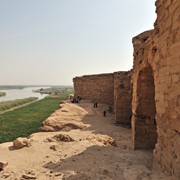