Do not forget/Ne Zaboravi Srebrenica is the title and the objective of Luciano D’Angelo’s photography exhibition, with texts by Edvige Ricci, designed and organised on the occasion of the twentieth anniversary of the Srebrenica genocide and the end of the Balkan war.

In continuity with the initiatives of Fondazione Benetton connected to the International Carlo Scarpa Garden Prize 2014, dedicated to the Bosnian villages of Osmače and Brežani, on the plateau above Srebrenica, the exhibition is open to the public in the exhibition spaces of Palazzo Bomben on Saturday, 23rd January 2016 at 5.30 pm, with the lecture Twenty years after Srebrenica. European women on a journey: the importance of sharing memories.

Two young Bosnian women take part in the inauguration of the exhibition — Azra Fetahović, teacher, and Nina Delalić, law graduate — who lived through the diaspora in Italy, where they still live. They are joined by Šehida Abdurahmanović, one of the Women of Sreberenica and among the most active supporters of her city’s rebirth.

The event will be coordinated by Isabella Panfido, writer and journalist. The event will also be attended by Luciano D’Angelo and Edvige Ricci, authors of the exhibition, and Massimo Luciani, Adopt Srebrenica Network, ANCI-Abruzzo.

Other public initiatives dedicated to Srebrenica and Bosnia Herzegovina are scheduled by the Foundation for the month of February.

The exhibition, which received the patronage of the Presidency of the Chamber of Deputies, is organised by Fondazione Benetton Studi Ricerche in cooperation with Fondazione Alexander Langer Stiftung of Bozen, the Adopt Srebrenica Network and the Mila Donnambiente association of Pescara.

Edvige Ricci, active the Italian environmental movement since its origins, is engaged in women’s social and political emancipation and has had political-administrative responsibilities in the Municipality of Pescara, where she lives. Founder of the Mila Donnambiente association, board member of Fondazione Alexander Langer and active participant in the Adopt Srebrenica supporting Network. 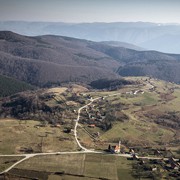