The Fresneda in the Escorial - FBSR Skip to content

During the public ceremony on Sunday 12th May 1996, held at the Teatro Accademico in Castelfranco Veneto (Treviso), the Carlo Scarpa seal was presented to José Luis Aguirre Borrell, the owner of the area. The financial contribution was awarded to Prof. Luis Cervera Vera, the distinguished Spanish scholar and author of a study of the monuments of La Fresneda (1985), who was thus able to carry out important research into the hydrogeological, topographical and landscape aspects of the site. His work was almost completed when Luis Cervera Vera died suddenly in 1998; the study is now to be published in Spanish in the series Memorie, in association with the Spanish publisher Doce Calles. 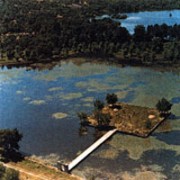 The Fresneda in the Escorial