Outstanding places is a collective study aimed at gaining knowledge on places from the point of view of the people and communities that live in them, and striving to involve society as a whole to reflect on fostering new levels of awareness and responsibility.

For five years, the initiative has been carried out on an annual basis in various stages through public meetings with the administration and study seminars, a public exhibition of all submitted materials, in addition to the collection of reports on “outstanding sites” submitted by citizens.

The seventy-six “outstanding places ” reported by citizens with the fifth call for entries (open from December 2010 to 2nd May, 2011) were presented in the first exhibition room with the very materials used by participants to report and describe them: the sheets, the various annexes, the answers to the questionnaires that the responders use to explain their ties with the reported site and the reasons for their participation.

The multimedia materials set up in the second room aimed to be a springboard for reflection on the vast and mostly uncharted issue of the relationship between person-place and community-place, mainly through the audiovisual report of meetings with some of the responders, held at the “outstanding sites” in the last five years.

Lastly, the third room, a space that could also house meetings and gatherings, was set up to offer an overview of all the precious material gathered over the five editions.

It was thus possible to retrace the history of the project through documents from the various editions, by browsing all of the materials stored in electronic format, or by watching the short film running on loop.

Once again, with the Outstanding places exhibition, we have aimed to offer to all citizens with an instrument to be able to personally interpret the meaning of the various reports and the numerous subjective ways in which places are perceived and described, to involve them in creating a new and widespread sensitivity towards good governance of the vital space in which today’s human condition finds itself, and in which tomorrow’s human condition is preparing itself.

Over 2,000 visitors were recorded, an encouraging number confirming the public’s continuing interest in following the initiative after five years, and whose active participation can be measured through the very high number of responses (almost 1,200) to the request to vote on the reported sites, often providing other useful and relevant observations.

As usual, the Jury of the International Carlo Scarpa Garden Prize, which controls the scientific and cultural guidelines of the initiative, expressed its observations on the fifth edition and on the project’s future. 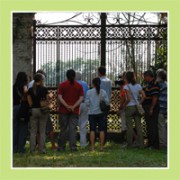 Nominations for the fifth edition of Outstanding Places were accepted until Monday, 2 May 2011.

The response of citizens was once again generous and passionate, providing yet another significant contribution to the collective study on the bond between people and communities and the places where they live, the focus topic of the Foundation’s research and scientific…