In the context of the 2019 International Carlo Scarpa Prize awarded to the Tea Gardens of Dazhangshan, the sinologist Livio Zanini, president of the Italian tea culture association, will hold a public conference on tea culture in China.

The tea plant originates in the tropical and sub-tropical zones of south-west China. The first written reference to a beverage prepared using the leaves of this plant dates to the 3rd century adbut it was not until the Tang dynasty (618-907) that tea became diffused throughout China.

Lu Yu’s Classic of Tea, which dates to this period, is the first book in the world to have been entirely dedicated to this drink. In the Tang dynasty, tea was prepared and drunk in a very different way from today. After harvesting, the leaves were steamed and compressed into cakes. The beverage was prepared by grinding a small piece of this tea cake and boiling the powder in a small saucepan.

In the Song period (960-1279) the custom was to prepare the drink by whisking some tea powder into hot water in a cup using a special bamboo whisk, the same method of preparation still used in the Japanese tea ceremony today.

During the course of the Ming dynasty (1368-1644), major changes took place in tea processing and preparation. The loose leaves were baked in a pan then infused in a teapot. By the time the first western missionaries and merchants reached China in the 16th century, this method had become the standard preparation method and was diffused by these visitors throughout the rest of the world.

During the last imperial dynasty, in the coastal province of Fujian, they started producing oolong and black teas. Very concentrated infusions were prepared using small tea pots and cups, according to a ceremony now known as gongfucha. Tea culture is currently experiencing something of a renaissance in China. The past thirty years have seen the birth of numerous tea houses as well as of many tea schools teaching the art of tea.

Livio Zanini is a researcher in Chinese Language and Literature at Ca’ Foscari University of Venice. He was awarded his doctoral degree in Asian and African Studies at the University of Ljubljana with a dissertation on the Form and Significance of Tea Connoisseurship in the Late Ming Dynasty. He is the founder and President of the Italian Tea Culture Association, and honorary counsellor of the China International Tea Culture Institute. His research interests focus on tea culture in China, especially tea literature produced in the Imperial period and the historical developments of this beverage. He has spent long periods studying in China and Taiwan, and has also made research trips to Japan and Korea, visiting numerous tea-producing areas and exploring the cultural and technical aspects of this beverage. He is the author of La via del tè. La Compagnia inglese delle Indie Orientali e la Cina (2012) and of various studies on tea and other aspects of Chinese culture. He contributed to the 2019 Carlo Scarpa Prize activities with an essay titled Before the arrival of tea in Europe. The Chinese beverage in western sources prior to the 17th century,  published in both Italian and English in the collective work The Tea Gardens of Dazhangshan. International Carlo Scarpa Prize for Gardens 2019, edited by Patrizia Boschiero, Luigi Latini, and Maurizio Paolillo (Fondazione Benetton Studi Ricerche-Antiga, Treviso 2019), and with a talk given at the public seminar From the tea gardens of Dazhangshan: landscape culture and rural heritage in ancient and contemporary China (Saturday 11 May 2019). 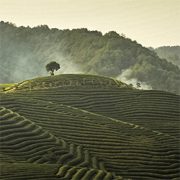 To be followed, at 7 pm, by a guided visit of the 2019 Carlo Scarpa Prize for Gardens exhibition, The Ground We Have in Common in the company of the exhibition curators Patrizia Boschiero and Nicolas Vamvouklis (Gallerie delle Prigioni, Piazza Duomo 20, Treviso).